The American Bus Association Foundation released its 2020 Motorcoach Census report, which showcases the size and scope of the motorcoach industry in North America.

According to the 2020 Census, the United States and Canadian motorcoach industries were decimated by the emergence of the COVID-19 pandemic in March 2020. The pandemic continues to create a hardship for the industry as it struggles to recover from devastating business and ridership losses. The North American motorcoach industry ended the year with of 1,873 companies that operated 30,860 motorcoaches, this was a 23.7 percent loss from 2019. In the United States, motorcoach companies fell from 2,111 to 1,717 and the number of coaches operated went from 32,474 down to 27,753 as several companies went out of business. In Canada, the results were just as bleak with more than half of Canadian motorcoach companies going out of business from 343 to 156, with less than half of the countries motorcoaches operating – falling from 6,042 coaches on the road to 3,107 in 2020.

Employment in the industry fell from 75,200 in 2019 down to 49,430 in 2020 because of pandemic downsizing and businesses closing their doors permanently.

“The COVID pandemic took a vibrant healthy industry and brought it to its knees,” said ABA Foundation President Peter Pantuso. “In 2019, the motorcoach industry moved nearly 600 million passengers, which was on par with the domestic airline industry, and now we’re down to 124 million. The industry lost a lot of small, family- and minority-owned businesses over the past two years and we continue to struggle to rebuild as the pandemic continues to mutate.”

As the federal government and states begin loosening travel restrictions and health mandates, the motorcoach industry hopes better times are ahead since more than 90 percent of the industry runs charter services, which relies on school and family trips. Commuter and scheduled services have also been adversely affected as business continue their work-from-home policies.

“We are hoping as the world starts to get back to traveling and working in the office again that the industry will pick up speed, however it will take years to return to our 2019 levels of business,” said Pantuso. 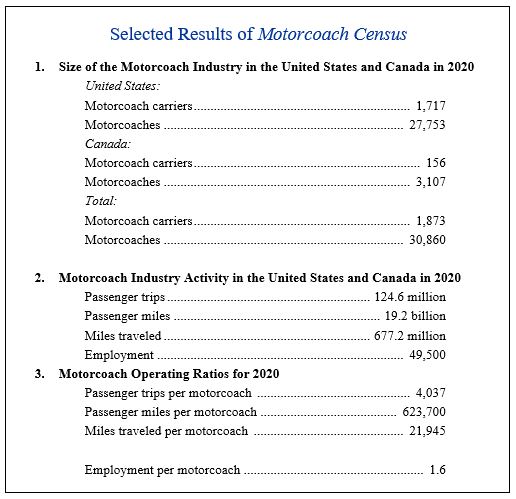 The 2020 Motorcoach Census details the size and activity of the motorcoach travel industry in the United States and Canada. The report, including full methodology, is available online at https://www.buses.org/assets/images/uploads/pdf/Motorcoach_Census_Survey_2020.pdf

The 2020 Census infographic is available at https://www.buses.org/assets/images/uploads/pdf/ABA_Infographic_2020MotorcoachConsus_Final.pdf

The American Bus Association Foundation (ABAF) is the scholarship and research arm of the motorcoach, tour and travel industry. The largest non-profit in motorcoach group travel, the ABAF distributes $100,000 a year in scholarships to industry families and invests in research to demonstrate the important role motorcoach transportation plays in society.