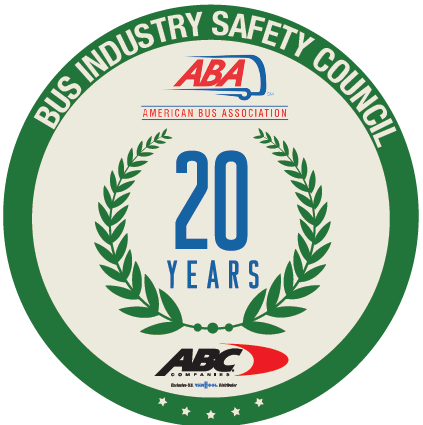 ABC Companies - a recognized leader in the sales, service and support of advanced transport solutions - will join the ABA Bus Industry Safety Council (BISC) in commemorating its 20th anniversary at the upcoming BISC Summer Meeting, June 25-26 in Baltimore. ABC Companies is the lead sponsor for all sessions, which will offer keynote presentations from industry experts, interaction with government agency representatives, networking opportunities, user group sessions and more to attendees, providing a unique forum to learn about the latest safety and compliance topics impacting motorcoach operations.

Formed in 1999, BISC evolved into a stand-alone organization from its predecessor, the ABA Safety Committee. Today, BISC is considered the epicenter for safety-related information, education and advocacy with the mission of improving safety in the bus and motorcoach industry.

“We are proud to support BISC as the lead sponsor since 2014,” states Dane Cornell, chief executive officer of ABC Companies and former ABA Board of Directors member. “BISC serves as a powerful conduit for knowledge and information sharing across the entire landscape of the industry and gives voice to all stakeholders at the regulatory and legislative levels.”

Louis Hotard, director of Technical Services at ABC, is an active BISC member, serving on BISC Executive Committees over the past several years. He was the 2018 recipient of the prestigious Norm Littler Memorial Safety award, which recognizes an individual or organization that demonstrates a commitment to safety in the motorcoach industry. He has also served as a professional moderator and motorcoach-industry association board member throughout his career.

“The June meeting affords BISC a great opportunity to recognize the efforts and dedication that our staff, committee members and all BISC participants have made throughout the past two decades,” said Peter Pantuso, president & CEO of ABA. “We are especially thankful to the ongoing investment of ABC Companies, as well as their hands-on involvement as content contributors and committee members over the years”.

ABC Companies created a BISC 20th Anniversary commemorative pin to be distributed during the BISC Summer Meeting. A celebration luncheon with presentations from industry veterans highlighting BISC through the years with vintage photos and memorabilia is also planned. BISC will continue the celebration throughout the year and at next year’s ABA’s Marketplace in Omaha, Neb., Jan. 10-14, 2020.

Looking ahead, Pantuso notes that while the industry continues to change and evolve, the basic principles of safety will always prevail. He cites autonomous vehicles, predictive software and new driver assistance tools as emerging technologies on the horizon that underscore the importance for safety. “The industry may look very different in the future, but it will always come down to protecting drivers, passengers and vehicles first”, he concludes.

“We look forward to marking this milestone anniversary with BISC, as we all work together under the aegis of BISC to further safety improvements industry-wide,” said Roman Cornell, ABC president and chief commercial officer and ABA Board of Directors member.

ABC Companies is a leading provider to the transportation industry with diverse product and service offerings that cover a full spectrum of operational needs including new and pre-owned full-size highway coach equipment along with transit specialty vehicles.  ABC supports customers with a comprehensive after sale service network for service and repairs, collision services, extensive OEM and quality aftermarket parts needs for transit, motorcoach and heavy-duty equipment from ten strategically placed locations throughout the U.S. and Canada.  Additionally, private and municipal financing and leasing options are available through the company's financial services group – one of the largest financial service providers within the industry.  For more information, contact ABC Companies at 800-222-2871 or www.abc-companies.com.