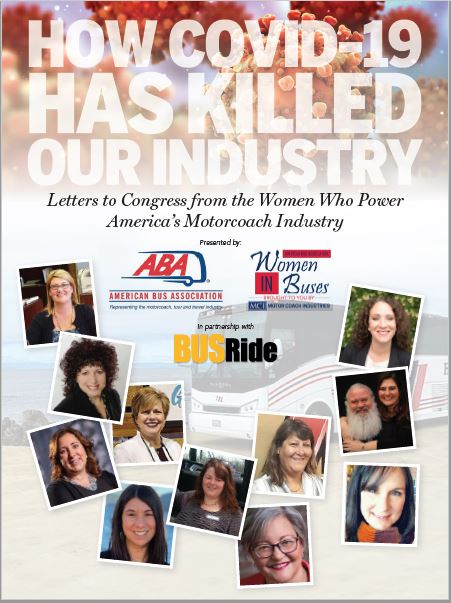 Since March, the majority of businesses in the motorcoach industry have shut down operations, furloughed staff and team members. Motorcoach owners, many of which are small family owned, multi-generational businesses, have been forced to navigate the role of multiple jobs within their organization working seven days per week, from sun up to sun down, to ensure the survival of their business with nearly 18 months of little to no revenue.

Many of these businesses are also led by brilliant and talented women and employ women in leadership positions. These are also the same women working to feed families, raise children, home school and maintain home environments because of closures, all while maintaining a professional career in the tour, travel and motorcoach industry. The fight to save their business and organizations is endless. Women in Buses continues to forge forward finding new ways to engage and support the industry and those in need of resources while they help everyone come together in a way never experienced before. Competition, differences in operations and even personal beliefs have been set aside to ensure survival during the worst economic times the industry has ever experienced. Women in Buses is a true testament of the statement “we are stronger together” and the stories included in this eBook reflect their common effort.

The American Bus Association’s Women in Buses Council recently teamed up with BUSRide magazine to create an eBook of stories from women in the bus industry and the effect COVID-19 has had on them and their jobs. More than 40 women from around the country contributed their stories in letters to their Congressional delegation.

“As Congress prepares to enact another economic recovery plan for the country, the motorcoach industry hopes that they will correct the error made during the CARES Act when Congress omitted the industry from the $86 billion it designated for other transportation sectors, such as airlines, airports, Amtrak and public transit,” said Peter Pantuso, president & CEO of ABA. “The motorcoach industry moves nearly 600 million passengers a year whether it is evacuating citizens out of harm’s way during natural disasters, students on field trips, transporting the military, connecting rural American to city centers, assisting commuters with intercity transportation to get to work or enabling families to take vacations in an economical and safe manner when other means of transportation remain costly prohibitive, buses move America. However, should the industry not receive federal funding to help it bridge these economic hardships, we will not be around when Americans are ready to travel again.”

Currently there are two bills in Congress, Senate Bill 4150 and House Bill 7642, both named the Coronavirus Economic Relief for Transportation Services (CERTS) Act, that will provide essential economic assistance to the industry.

“The Women in Buses Council gives special thanks to BUSRide magazine for helping these women make their voices heard,” said Women in Buses Chair Elizabeth Hall from John Hall’s Alaska in Anchorage, Alaska. “The purpose of this collaboration was to not only showcase women in the industry but to give real life examples of how COVID-19 has destroyed our industry. We hope that by reading these letters and seeing the faces of real people they represent that Congress will help our industry survive this pandemic.”

About Women in Buses Council

Women in Buses Council (WIB) exists to recognize and advance the role of women in the motorcoach industry through networking, education and mentoring programs. It was created in 2011 and is a program of the American Bus Association. Since that time, the leadership, structure and activities of the Council have been developing to meet the goals of the Council. For more information, visit https://www.buses.org/about/councils/WIB

For more than a half-century, BUSRide has been the industry’s most reliable source for news; trends; vehicle and product field tests; new product and service information; exclusive research and analysis; and editorial content by trusted industry thought leaders throughout the world. BUSRide serves the senior leaders of motorcoach companies; public transit agencies; paratransit, shuttle, commuter and school bus operations; travel & tour providers; bus maintenance facilities; and industry suppliers. With a total reach of more than 51,890 transit, paratransit, motorcoach, community transportation, school bus and shuttle operators in the United States and Canada, plus thousands of social media followers — BUSRide is read five times more than any other publication for industry news. For more information, visit https://busride.com/