The American Bus Association Foundation released its 2017 Motorcoach Census report, which showcases the size and scope of the motorcoach industry in North America.

According to the 2017 Census, motorcoach travel remains one of the most flexible, cost-effective and environmentally efficient modes of transportation. In 2017, the motorcoach industry provided 574.6 million passenger trips, this compares to 741.6 million enplanements[1] on domestic air carriers and 31.7 million [2]

On average, a motorcoach provided 15,418 passenger trips in 2017, provided 1.7 million passenger miles, employed 2.6 people, used 6,160 gallons of fuel, and traveled 39,506 miles. The Census shows an industry that serves a broad range of customers that moves people with great fuel efficiency. It also shows an industry that provides charter, tour, and sightseeing services, which are of vital importance to the travel and leisure industries, and intercity scheduled and commuter services, which are essential components of the passenger transportation systems in both the United States and Canada.

“Despite the industry going through a consolidation phase over the last few years and facing a massive driver shortage, we are still moving people in the most efficient and passenger friendly manner,” said Peter Pantuso, ABA Foundation president. “Motorcoach travel remains one of the most cost-effective and environmentally friendly mode of transportation in North America.” 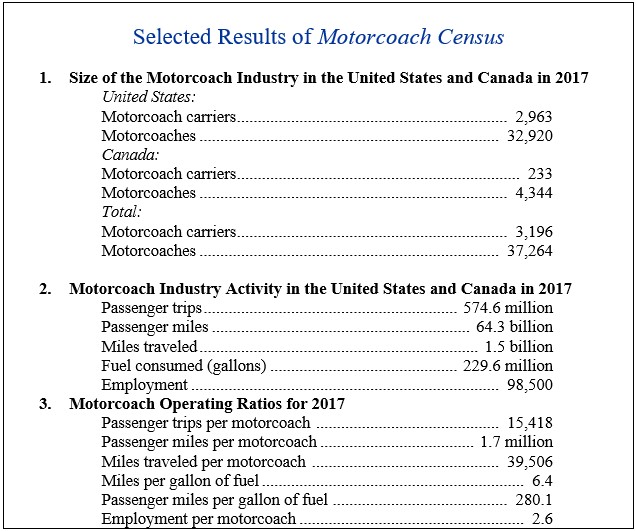 The 2017 Motorcoach Census details the size and activity of the motorcoach travel industry in the United States and Canada. The report, including full methodology, is available online here. The 2017 Census infographic can be viewed here.

1. Bureau of Transportation Statistics at https://www.bts.gov/newsroom/2017-traffic-data-us-airlines-and-foreign-airlines-us-flights