"Human trafficking is a disgrace on American roadways that needs to be eradicated. We have a very diverse industry and ABA wants to be the key connector to the industry with this great program."
- Peter Pantuso, CTIS, ABA president & CEO.

ABA is committed to promoting awareness of this violation of human rights by educating motorcoach companies on how to spot and report any suspicious activity and has partnered with Truckers Against Trafficking’s program Busing on the Lookout as well as government agencies to provide resources to companies. 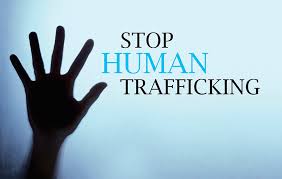 What is Human Trafficking?

Modern-day slavery or human trafficking exists whenever people are bought and sold for forced labor or commercial sex. Around the world, it is estimated that there are more than 40 million slaves today. Human trafficking has been reported in all 50 states, and the number of victims in the United States is estimated in the hundreds of thousands.

While illegal, human trafficking is a booming business. Traffickers recruit out of our schools, online, in shopping malls, as well as on the streets and other locations. A large percentage of the people trafficked are women and children. Many of them are used in the sex industry. They are the prostituted people on the street and in private homes, and in legitimate businesses such as restaurants, rest stops, bus terminals and motels. They need to be identified and recovered.

According to the National Human Trafficking Hotline, since 2007 more than 178,000 calls have been made to the Hotline resulting in more than 40,000 cases of human trafficking with an estimated victim number more than 45,000.

You Can Make a Difference

When building an army to fight a crime like human trafficking, members of the bus industry can play a key role, primarily because of the actions of traffickers themselves:

Additionally, the diversity of the busing industry itself, from touring/travel buses to metro buses, rapid transit and public transportation to school buses and other private bus lines, including charters, provides multiple ways for human trafficking victims to travel, whether they’re going cross country or just across town, whether they’re still in school or a bit older, whether they’re in a group, with a trafficker or traveling alone. At times, school-age victims are still riding school buses daily, even while under a trafficker’s control, and just before they disappear from normal life completely … unless someone is observant enough to aid in their recovery.

The positive news is that bus drivers are already making a difference in fighting this crime. A number of them have already recognized things that didn’t seem right with passengers they’ve been transporting. Their calls to law enforcement have resulted in successful victim recovery. If every bus driver and bus station employee could be trained to identify the signs of human trafficking and how to report it effectively, imagine how many victims could be recovered and, potentially, how many traffickers could be arrested!

In an effort to combat human trafficking on America's roadways, railways, airways and waterways, the Department of Transportation announced it would permanently ban commercial drivers convicted of human trafficking.

Following President Donald Trump’s signature of the “No Human Trafficking on Our Roads Act,” the Federal Motor Carrier Safety Administration (FMCSA) has issued a new rule to prohibit an individual from operating a commercial motor vehicle (CMV) for life if that individual uses a CMV in committing a felony involving a severe form of human trafficking. The new rule revises the list of offenses permanently disqualifying individuals from operating a CMV for which a commercial driver’s license or a commercial learner’s permit is required.

In 2017, the Department of Homeland Security identified more than 500 victims of human trafficking and the National Center for Missing & Exploited Children estimated 1 out of every 7 runaways were likely victims of child sex trafficking.

ABA member Coach USA/Megabus helps human trafficking victims by providing free tickets to help victims travel to another city along a Megabus route to reunify with the family, access special services or participate in the prosecution of their trafficker. 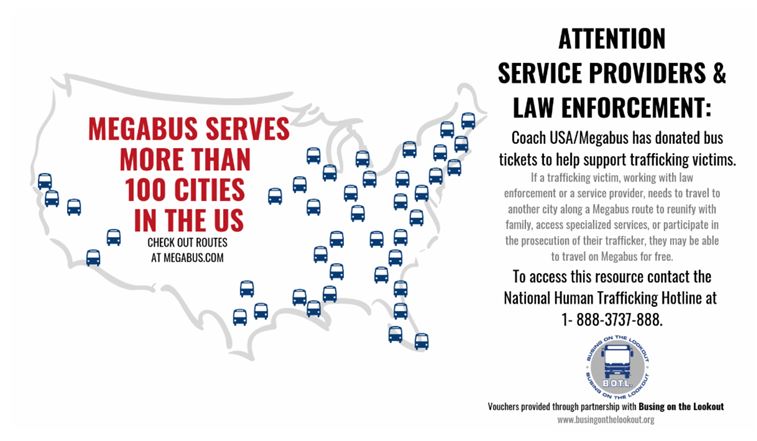 Busing on the Lookout Safety Presentation

Busing on the Lookout webinar: How the Bus Industry Can Help Combat Sex Trafficking

Make the Call, Save Lives 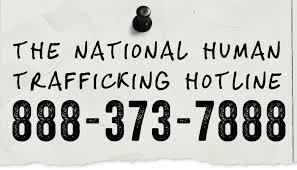 Please share this information with every bus driver in your company:

Warning: DO NOT approach suspected traffickers. Call the hotline, and if instructed, the local police (911). Allow law enforcement to deal with traffickers and recover victims. Approaching traffickers is not only dangerous for you and their victims but lead to complications in the eventual prosecution of traffickers. Also, please notify dispatch or your manager of suspicious activity.